In 2012, the Vermont Legislature unanimously passed Act 148, a universal recycling and composting law that offers Vermonters a new set of systems and tools for keeping as much as possible out of the landfill. The first thing the Legislature did was jettison the concept of waste itself.

Our “waste” stream is composed largely of recoverable resources. With so many options for recovering and reusing recycled materials, and with landfill space steadily shrinking, the State of Vermont has determined that the best tool for keeping as much as possible out of the waste stream is a materials management system, where valuable resources that we are currently burying in landfills are instead collected and marketed as commodities. To achieve this, the current system needed to be upgraded. Act 148 is a giant step in that direction.

Why do we need a universal recycling law?

Much of what could be recycled or composted is still ending up in the landfill. Over the past 25 years, three things have happened:

Act 148 is designed to encourage the development of infrastructure and systems that will enable everyone in Vermont to keep reusable resources out of the landfill and make progress in energy and resource conservation.

Tools and systems will be designed as much as possible based on the following assumptions:

What the Universal Recycling Law includes

Bans on the disposal of certain materials

Landfill bans will be phased in through the year 2020 (see timeline below). For example, in 2015, all mandatory recyclables were banned from the landfill throughout Vermont. This is already in effect in Chittenden County.

Also in 2014, businesses generating over 104 tons of food scraps per year were required to send those scraps to a donation program, a farmer for livestock feed, and/or a composting facility. In 2015 that ceiling dropped to include those who generate more than 52 tons per year, and so on. By 2020, food scraps from all businesses and residents will be banned from the landfill.

All such facilities were required to accept mandatory recyclables and divert them from the landfill by 2014, leaf and yard debris by 2015, and food scraps by 2017.

Certain conditions will allow exemptions from this requirement.

A hierarchy for managing food scraps and yard debris

Similar to the U.S. Environmental Protection Agency’s hierarchy, the universal recycling and composting law encourages businesses and residents to prioritize their diversion practices based on the following hierarchy: 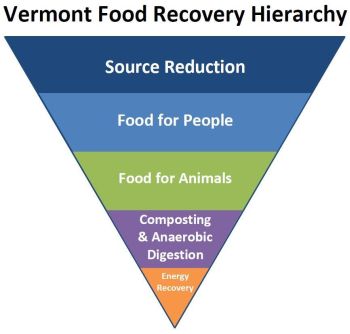 Phased in over time, starting with largest generators, the above diversion hierarchy will apply to all Vermonters in 2020. See timeline below for specific phases.

Also known as “Pay-As-You-Throw” (PAYT), variable rate pricing has proven to be a successful incentive for reducing the amount of recyclables that end up in the trash can.

Variable pricing is based on volume or weight and more accurately pegs pricing to the actual amount of trash collected from a household. This results in those who produce more waste shouldering their true share of the cost of managing that waste. At the same time, those who generate less trash (through reducing consumption, reusing, recycling, or composting) pay proportionately less.

Requirement for recycling containers to be provided in publicly owned spaces

Wherever trash cans are provided (except bathrooms), the universal recycling and composting law requires that recycling containers also be provided in state and municipally owned spaces.

What does the universal recycling law mean for households?

Initially, not a lot if you are a resident of Chittenden County, because the Chittenden Solid Waste District already has landfill bans on a number of materials, including the state’s newly designated mandatory recyclables, as well as yard and garden debris; and requires haulers to provide recycling pickup at households subscribing to curbside trash pickup.

Wouldn’t it be great if the entire state of Vermont used one set of symbols to let everyone know where to dispose of recyclables, compostables, and trash? We think so! And so do all the folks from around the state who saw the passage of Act 148 as an opportunity to come together to create such a set.

Download symbols for use on posters, signs, stickers, online – everywhere! Because the more we can help people see alternatives to the trash can when they’re wondering what to do with their recyclables and food scraps, the more valuable resources we can keep out of the landfill. Download all symbols (zip).

Who came up with this set of symbols? A team of solid waste management entities, staffers from the Vermont Agency of Natural Resources, private haulers such as Myers Container Service and Casella Waste Systems, as well as the Highfields Center for Composting, among others.